Although I did not get as much painting done this week as I had planned, I did put together the portfolio of photos and summaries for the show. I also had 20 prints made of “Alberta Skies” ($15 each or $20 includes shipping), and cards of “West Wind Rushing In” ($5 each or 5 for $20). 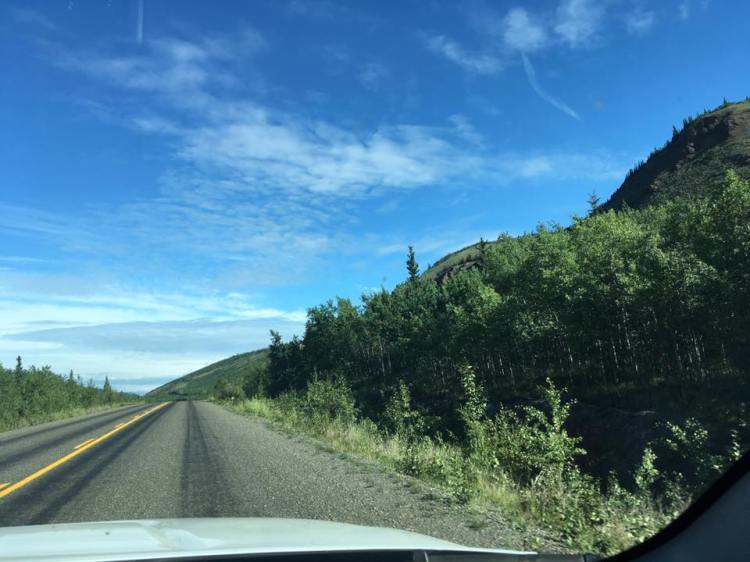 This was taken from her car, at the beginning of her trip into Yukon Territory.  She had many incredible images from her trip, but this was the one that really spoke to me as an artist. You can feel the land changing in the picture, and you know something great is around the bend! I have never been to the Yukon, but sure hope to travel this road someday.

I discovered this photo on Facebook through the Northwest Territories Tourism page. I contacted them to ask for permission to use it, and they told me it was owned by Parks Canada, so I would need to contact them. Which I did, and they responded the photo is by Fritz Mueller and I would need his permission. Thank goodness for google, I found his website and contact info. His partner responded promptly, stating that Parks Canada owns the photo so it would be up to them. At this point, all three contacts had said it was a lovely idea and would make a lovely painting, suggesting I also promote the National Historic Site (Full Credit to the owner of the photo Parks Canada):

“Saoyú-ʔehdacho (Saw-you-eh Aa-daa-cho), also known as Grizzly Bear Mountain and Scented Grass Hills is Canada’s largest National Historic Site — about the size of PEI. This cultural landscape has great spiritual significance for the Sahtu people and it features prominently in their oral histories. It is also the first National Historic Site designated and co-managed by Parks Canada and Indigenous group – Deline First Nation.” – Northwest Territories Tourism.

When I reached out on Facebook to my friends to share their photos of Canada with me for my project, I thought Nunavut would be the hardest image to get. Yet it was my first response! I had no idea Jen had been that far North, and for her it was a life changing experience:

“Being in Nunavut changed the way I viewed a lot of things. The Inuit people are by far some of the most amazing people I’ve encountered over my travels. A 20yr old boy I worked with inspired me to go back to school for Environmental causes. This kid knew more about the land and animals and how to live with them, more then any person I’ve met in Ontario. But that was part of the culture they teach their children at a young age to live off the land. He had a use for every plant we would come across on our hikes.”

Taken during one of her many hikes out west. This is Squamish, British Columbia.

I was lucky someone sent me this photo privately, because I have never met Robyn and she’s not on Facebook!

As soon as I saw this image I knew it was what I wanted for my B.C. painting. I have done a ton of mountains, and I wanted an image that captured the forest and the trees out west. This one even has mountains in the distance, everything about it makes perfect composition. I especially enjoyed playing with the colours as I painted from this photo.

This woman always posts THE BEST pictures of Alberta Sunrises and Sunsets, and skies in general. I’ve seen many a photo that make me go “hmmm… that should be a painting.” I messaged her privately for a few images, but this one had stuck in my mind from weeks before. She sent me a ton of gorgeous ones, but when I mentioned this specific one, and she sent it, I was like “yep, that’s the one.” 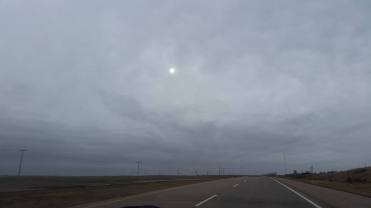 These two photos were taken on the same day, October 31st (yep Halloween), 2016. I was driving with a friend from Ontario to British Columbia, and this was one of the most dreary of the 5 days of travel. I knew the Manitoba photo would become a painting someday, but when no one had photos to share from the prairies I had to start digging through my own images from last year. These two were painted at the same time, they really match and go hand in hand since we crossed both provinces in the same day!

This summer in Ontario was so vivid, and I was determined to get a colourful field of wild flowers to paint (I had visions of greens, yellows and purples). Unfortunately, nothing too vivid ever came out in any photos I took, and it was my photographer friend Cathy Nevin who offered to go on a little country drive with her pro camera and find some landscapes for me. She had a TON of incredible images, and Ontario was actually the most difficult province for me to make a final decision on what to paint.  Likely because I have seen a good chunk of this vast province, and it has all touched me deeply. However, I have done a lot of Northern Ontario paintings, and thought it was due time I did something closer to my heart and home: Northumberland. Thank you Cathy for this lovely image on Massey Road, Grafton.

This is another province NO ONE sent me pictures from, but oddly I had already painted an image of Quebec for my summer show, that also just happened to be the same size canvas I was planning this show around.

These are old photographs, taken in the Autumn of 1996 (when I still owned a pentax film camera). I was staying in Ottawa with my uncle and his family, and we drove over to Gatineau, Quebec, on Thanksgiving weekend for a hike. I will never forget how outstanding the colours were that day.

You might have seen this image floating around Facebook (no pun intended). It went viral last summer: most viewed iceberg pic from Newfoundland this summer! Seen by millions and some say it is photo-shopped and fake. It is neither – Doreen has lots of iceburg pictures from over the years in the same area. It was just taken on automatic landscape mode . I contacted Doreen through Facebook, and she gave me permission to use her image for one of my paintings. In fact, this was the one that really got me motivated to paint. When I saw it I wanted to hop in my car and do a cross country trip all over again, because there is so much I haven’t seen, and didn’t know about, in our country.

When I asked her for a story about the photo she simply replied: “I was on a friends patio up on a hill, and I zoomed in with a telephoto lens.” June 15, 2017.

It has been so fun connecting with new people through this project.

Emily recently moved to New Brunswick with her family. When she posted this picture (I cropped the kids out), I immediately noticed the shape and curves of the rocky land in the background. I can’t wait to see more of her photos, and go visit someday too. 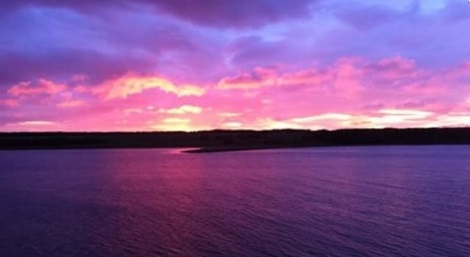 As soon as she sent me this, I knew it was the one. Incredible colour, simplicity and for me it evoked deep emotion. It feels both calming and energizing to me. I just love it!

This woman was so excited about my project, she was taking pictures FOR IT while vacationing in Prince Edward Island. I could not make up my mind which photo liked better… so I used my creative forces to meld the two photos into one painting. I do love a challenge. Thank you Carrie for you thoughtfulness!

This project never could have happened without these inspiring images. Thank you everyone who has contributed. The show (with all the paintings) will take place on Saturday, December 16th in Port Hope.

(I still have 7 more paintings to complete before the end of November, ahhhhh!)

Yogini since I was 17. Certified yoga instructor since I was 24. Totaling over 20 years of experience. Thousands of hours of practice, teaching, learning, sharing, loving, growing. I believe yoga needs to be made accessible to all people, even if that means simply practicing breath work. My business is named "The Gentle Way of Hatha" because from my personal experience it is the gentle practice that has been the most liberating, and what I wish to share with others. The essence of yoga: inner peace. Finding your calm in the chaos of life. Artist my whole life. Failed OCAD (well I didn't really give it a chance, I dropped out after one semester). Continue to create regardless. Check out JenniferAnneBurke.com to view my work. I love to travel, and hope to make it to Iceland in 2020 for an art adventure. View more posts

One thought on “Canada Project: The Photos”